22/11/13
Wow! October has been wild ride and we've got a fair bit of news to share with you.
Kyla goes to Dookie Royal
Kyla G11 had her first show outing at Dookie Show. She behaved very nicely and a little girl is very proud of her red ribbon. Kyla has been joined to Rogialyn Gandalf
And we came home from the show with a new member of the family. Meet Roger, Roger is a Kelpie Collie cross and was breed by a local roustabout. He is a very clever little dog and is showing interested is the cattle. He is very active for a puppy and has already made a dint in the shoe population at the back door! (lost a few more brownie points as they were someone's good work shoes) the joy of puppies. 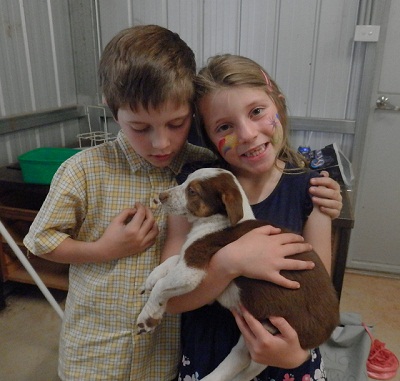 Davo's tour of NSW
Davo has been doing Taking Stock sessions with dairy farmers in NSW which gave him the golden opportunity to stop in at Cadfor and Rogialyn Murray Greys. He was particularly impressed with Vanilla. Vanilla has a fantastic rear end combined with fantastic type. Rod purchased Vanilla at the Wallawong sale this year and was the equal top priced animal to his full brother Wallawong ultramodern. 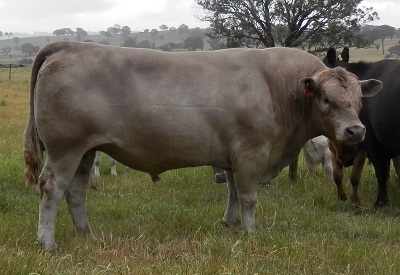 Rain - finally
It's been a dry spring  with 30mm in September and October and for a while there our new little lucerne plants looked a bit sad but we've had a few 15 mm last week and it's looking good again, but still will need some follow up rain.
13/10/13
Mating has started
We have started joining our cattle for next Season. Dajory Echuca, The Glen Bass F226, Cadfor Destiny and Rogialyn Gandalf will all be used this season.
13/09/13
Bull-a-rama
Only 3 cows left to calve and we have had 12 bulls and 6 heifers. We have such a lovely crop of young bulls to choose from.
13/09/13
Scanning results
Liam Cardile visited yesterday and scanned all of our young bulls and heifers. Josie H11 is definitely the pick of the drop with great feet and legs, EMA and IMF, and terrific growth rate.
27/08/13
Calving update
All of our AI calves are on the ground now and we should be finished calving in 2-3 weeks. We've had a great run of bull calves - only 3 heifers out of 12 calves so far. Calves by Bass F226 and Destiny are looking pretty special. The favourite so far is Jackpot, a silver bull out of Uplift Josie by the Bass. He didn't look big but he's a solid little chap - weighing him was like lifting a brick.
22/08/13
New EBV calculations
It will take a while for us to update all our pages. For up to date EBV's just click on the bar graph symbol

in the table underneath each animal's photo - this will take you to that animal's details on the Breedplan website where you'll be able to find current information (you will then need to click on "Show Index Values" underneath the EBV table.
13/08/13
Moonspinner does us proud!
Moonspinner has had a bull calf and we are very excited. Juggernaut is sired by Cadfor Destiny and has nearly pure Willalooka bloodlines. His EBVs should be low birthweight (in fact he was 38kg which is a nice surprise coming out of such a roomy cow) and high growth with positive fats. He has outcross bloodlines for most of the cows in our herd so we'll be keeping a close eye on his development as he is potentially a future herd sire for Mount Major.
10/08/13
Watching and waiting
It is an understatement to say that mornings are not my wife's strong suit. To see her willingly get out of bed was a big surprise. Dressing gown, gumboots, coat, a beanie: I hope the fashion houses of Europe are watching! Remember you saw it here first, trend setters. We are within a week of our planned start of calving so there could be calves coming any day now. The most likely cows to calve have been drafted into the calving paddock and watching has begun.
31/07/13
Bunker Beauties
We have been lucky enough to purchase some cattle from Howard and Marion Woodall: Bunker Farm Melody 2nd G51, Bunker Farm Janice G53, Bunker Farm Beroleanne H75 and Bunker Farm Melody 5th H77 are all welcome additions to the Mount Major herd. These females will provide new bloodlines for us and our clients. We would like to thank both Howard and Marion for this wonderful opportunity. The cattle have settled well and G51 and G53 are due to calve in the next couple of weeks to Rogialyn Frame Up RGN F20.
14/07/13
Peter Shields' cows
Peter Shields bought two cows with calves at foot from us last year and we spent a very pleasant Sunday afternoon seeing how they were going. The heaviest vealer weighed 358 kg and they averaged 321kg. A fantastic result over the driest 9 months on record, with only minimal hay supplementation.
16/06/13
Relative Success
We entered a number of cattle in the recent on-farm challenge organised by the North East Victorian Breed Promotion Group. Echuca, our senior bull, was pipped into second place (but only by 2 points) by Dajory Dynamic in his class. Amazingly though, every one of his relatives that was entered in the event received a placing. His mother, entered by Dajory, won the 36 month and over female class and his son Mount Major Gazzle DVD G6 won Champion Male above the senior bulls and was beaten to Supreme Champion by the slightest margin. Every one of his calves that we entered, received 1st , 2nd or 3rd place ribbons in big classes. We know, through his EBVs, that Echuca is passing on great performance to his offspring but these results show that he is passing on his fantastic type as well, and confirms our belief that he is an elite sire.
1st  and Champion Male Gazzle DVD G6
2nd Hydramatic DVD H9, Jenny DVD H15, Coca Kyla DVD G11, Echuca RJD E42
3rd Hoodoo DVD H20, Josie DVD H10, Tarella  DVD G2
15/06/13
Glorious Rain
100mm (4") of rain has fallen over the last few weeks. The dust has turned to mud. The rain has been coming down slowly and every bit has soaked in. It is staying sunny and mild and the grass is coming away nicely. The lucerne has had a good strike, but I can see a bit of earthmite damage already.  The cattle are grazing green feed for the first time since October.
Sowing
We have sown lucerne into two of our four Northside paddocks, carefully checked the sowing depth and now all we have to do is wait for rain . . . and wait . . . and wait.
Farm Pics
Not content with being able to see cows from every window in the house, Davo's Christmas present this year was a large framed picture of . . . cows! Local professional photographer, Serana Hunt (Photo8), came out and did a photoshoot of the cows. Coming from a dairy farm, she was completely unphased when the whole herd galloped towards her and gave us some great shots. 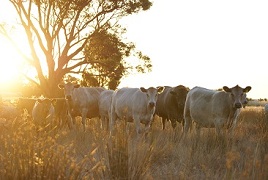 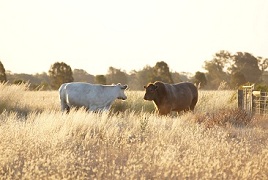 05/04/2013
Preg testing
We had Shepparton Vet Clinic out yesterday to preg test all the cows. Now our herd is growing, our main calving paddock will be overloaded and too dirty by the end of 6 weeks of calving so we will need to split the herd and use two calving areas. We found only two empties and it looks like the AI program was very successful. Is it too early to get excited about calving?! There should be some very special calves hitting the ground in August, including Moonspinner's Cadfor Destiny calf and one by The Bass F226 out of Josie C4 (the dam of our No. 1 heifer calf, Josie H11 - see below).
02/04/2013
Working Bee at Boomanoomana
On Easter Monday the North East Victorian Murray Grey Breed Promotion Group organised a working bee at Bill & Ann Nolan's farm, Noree Murray Greys, just east of Barooga. The recent tornado had brought down a lot of trees and branches and we helped with the clean up so Bill could tension up his fences and contain the cows again. While we were there we took the opportunity to inspect the progeny of Mount Major Frozone who Ann & Bill had bought in 2011. Looking good!
14/04/2013
Mount Major Murray Greys Takes on Northside
We have been very busy over the last few months buying a neighbouring 100ac block. It is a great opportunity to expand our herd which is beginning to outgrow our modest 100ac. Scott Quibell has done a fantastic job of re-fencing for us and after weeks of handfeeding, the cows were very glad to get out and try grazing again. Only canola stubble for now, but we are planning to put in some more lucerne as it is such handy summer feed.
12/3/13
Mount Major Josie H11 #1
Mount Major Josie is number No.1 for all $ indexes in the 2012 female group, +74 for Longfed, +70 for Supermarket and +80 for Heavy Grass fed. She also has a 200 day growth rate of +35.  A fantastic daughter of Echuca, Her mother Josie C4 is a fantastic breeder for us and a lovely cow. Josie is really looking the goods: silver, fantasic growth and soft as butter. This picture was taken in October when she was nearly 2 months old.
Mount Major Hoodoo #1
Mount Major Hoodoo has come up No. 1 for 2012 Junior Sires for Supermarket (+72) and Longfed (+74) indices.
Echuca jumps in the rankings
With the submission of weights from his second drop of calves, Echuca's indexes have risen too: LF +72, SM +72, GF +78. His 200 day weight is +36 and a massive +54 for carcass weight. His calves are showing his growth and type and impressed visitors at Beef Week. Echuca's indexes rank him in the top 10 active sires for the breed.
My Beautiful Girls
Maisie and Sarah have been breaking in Maisie's first cow Mount Major Coca Kyla as a summer holiday project. All have been having fun with Maisie hopping up for a ride. We are planning to take her to a show. 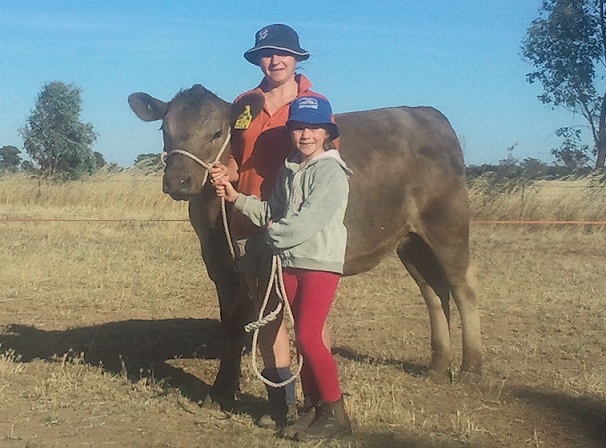